This is the third remake of Yoko Kamio's 'Hana Yori Dango' manga. First, the Taiwanese drama 'Meteor Garden'; second, jdorama 'Hana Yori Dango' and third, the kdrama 'Boys Before Flowers'. Geum Jan Di is a swimmer, part time-waitress and a daughter of a drycleaner who suddenly finds herself enrolled in the prestigious Shin Wa High School and the target of the F4 , meaning of the whole school. 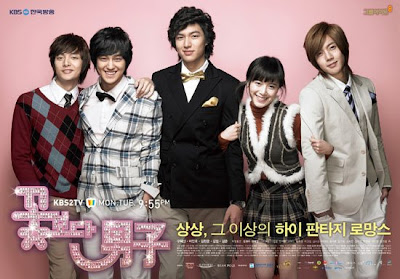 Kudos to G8 for producing a very addictive drama. The kdrama version tweaked the original story to their advantage and made most out of the stories of other minor characters. Even if this is the third time that we've seen the story, it doesn't feel predictable and it still has a sense of familiarity. You'll feel a lot of deja vu's especially in scenes like kissing againt the sun or GJP running after the bus. Acting-wise and drama factor, the jdorama is still the best but BBF was able to make it's own magic with great casting and over the top production.

At first, I think Lee Min Ho is just a mixture of Jerry Yan's look (but hotter) and (inferior to) Matsumoto Jun's acting. But as the story progress I totally fell for his character. He was able to own Gun Jun Pyo with his potrayal and built. Koo Hye Sun also has a different attack to being Geum Jan Di. I think it has something to do with cultural differences. 'San Chai' and 'Makino' actesses have different treatments to the character like facial expressions or acting natural to their country. Kim Hyun Joong's acting is the only thing that I hated among the characters especially when he makes his eyes pop. But as the drama goes on his skills improved that I began rooting for him too. I'm still not convinced if the third crying scene was real or fake. First it was raining. Second it was all sounds and no close up and last it was a close up with a single drop of tear. Kim Bum has boyish charm but I find his acting exaggerated at times. I felt bad for Kim Joon's charcater who had no backstory at all. I wish they added more comic scenes like when he was dancing by himself and I find his English words funny. I was awaiting for the Jin-Sun-Mi trio but they never made an appearance maybe as not to address that Sunny character has passed away while the drama is still filming.

The casting, direction, scenes, clothes and music are all glossy and eyecandy. The over-all casting and stylized fashion is distracting at times. Everybody looks like they stepped from magazine covers. Even the layman clothes of Geum Jan Di looks so made up in a cute ways. There's a lot of elements in the cinematography, location, props and direction. I can only imagine how many shoots, wardrobe changes, editing etc. that they spent. They maximized the lifestyle of the rich from the sportcars, the overseas locations, the instruments, sports etc. I felt bad that I didn't watch it in HD right away.The music is very poppish and I read in one of the reviews that it was overplayed but it really grew on me. There was a backlash with the use of CGI effects, in the first half but it's not new at all. Remembere the very fake chopper with roses in 'Meteor Garden' and how about the F4 plane in HYD movie? I felt sad that the deal is for 25 episodes only. I felt it was short-lived but worth watching again. The third time is indeed a charm. Sa Rang Hae Kgotboda Namja.

Asking "Where I can find this?" will not be published. Thanks!

Also, I do not approve spam comments. :P