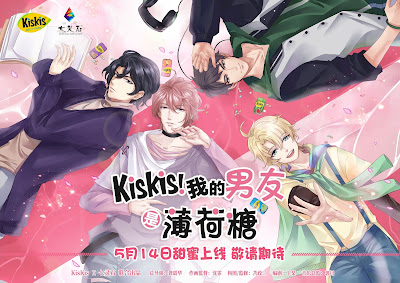 
Tang Tang meet guys who each represent a flavor of mint candies. It has a catchy, cute opening. At first there's a different feel on it which I can't pinpoint. And then I realized that they are talking in Chinese! This is my first completed Chinese animation. Well since it was way too easy to finish it. It's 5-minute ONA for 4 episodes. I think this premiered last June 4. But the first Chinese animation I watched is still currently airing (unconfirmed reverse harem), Phantom in the Twilight, which is a collaboration between Japan and China. Oh back to back Chinese reviews after The Flame's Daughter. Is China going to be booming with reverse harem now?

I'm not sure if this is anthropomorphism since the other two are part of her past or was it something made out of fantasy too. This is not the first time too that we have reverse harem used for promotion or for mints for that matter. Japan had a reverse harem campaign for chewing gum, Gum Kare. But the storyline reminds me of First 7 Kisses (which promotes Lotte Duty Free in Korea). I'm not going to dabble on it further since it's too short.

The heroine reminds me of Shan Chai of Meteor Garden 2018 when she gets angry. And who's my favorite mint? It's Peach guy. His story is sweet and funny. Nothing we haven't seen before but heck you can watch this for less than half an hour so why not? Thanks Imane Orannaise for the recommendation!