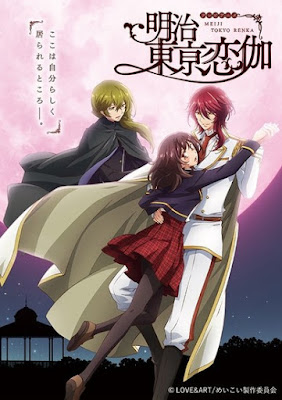 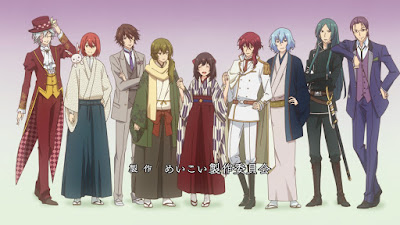 Mei keeps to herself because of her ability to see ghosts.  Not wanting to be center of attention she finds herself chosen in a magic trick. She's then brought to the past where she meets popular men of Meiji history.

I have actually seen the movies, Meiji Tokyo Renka Movie 1: Yumihari no Serenade and Meiji Tokyo Renka Movie 2: Hanakagami no Fantasia a few years back on Youtube with Spanish subtitles which I then translated into English using the auto-translation feature of Youtube. Oh and it was removed right away. :D The end result was a crude translation but you get the gist of the story. But it feels like it doesn't count as completed so I didn't blog about it. Even though it might have gotten lost in translation, it was no brainer that the movies were bo-ring. The main guy or route is also different.

Now this anime series has redeemed itself. It's the same story and characters but the treatment and storytelling is refreshing, natural and entertaining. Of course the other conflicts are different but the bigger story is the same.

I didn't like the Ogai. It feels insta love.  But he grew on me at the last couple episodes. He reminds me of Tamaki of Ouran. My favorite guy is Otojiro or basically the gender bender episode. I wished his route was explored further. I wanted more of Otojiro and Mei. I want to eat Sunsho-san! He looks like a matcha especially when his eyes is lackluster. And surprisingly he's the most seductive of 'em all! I didn't know he had it in him. Kyoka is adorable too and I'm biased since he's my favorite from the movie. Mei's really funny and she’s vocal with her romantic feelings unlike most of otome games turned anime. I liked how she started as timid girl and in the end she's confident with her decisions in life. But that doesn't mean I wanted the path that she chose. Okay, I'm zipping my mouth now. But I hope the live action drama and live action movie has a different ending. Remember what they did with Hakuouki movie?

It's been a while since I watched a reverse harem anime that I enjoyed. And it was successful in making the reverse harem element not forced unlike other otome adaptations. But to be fair, I'm not yet done with the previous seasons. I also enjoyed the friendship between the bishonen. I can't remember the last time I favored the guys collectively instead of individual characters vying for the heroine's attention. Now that I try to think about it my favorite bishonen dynamics would be Yona of the Dawn, Ouran High School Host Club and Fushigi Yugi.

The jazzy, retro opening reminds me Hanayaka Nari, Waga Ichizoku: Kinetograph because of the setting. But the similarities end there. For other isekai animes and  historical animes, just click on the tags.  For isekai x historical figures, you may try Nise no Chigiri manga and Sengoku Night Blood anime. It's embarrassing that I've learned the term isekai (transported into a different world) only recently. ^^;;; Thanks JaredMithrandir. I also found out just now that the tags are available though web version only.

I think you could live without seeing the first two movies. It was very serious but this time around the anime series version is laidback and fun. Hooray for posting a review right away from winter season and first anime review too for the year! My plan is to watch currently airing shows and then work my way down to seasons in descending order.