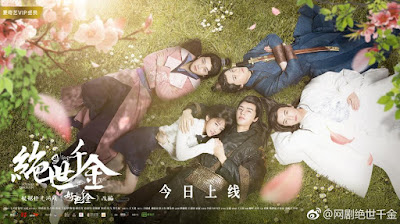 
Lin Luo Jing tries an otome game and then finds herself inside the game as the main character/player. The object of the game is to find true love. Will she find it from the four characters? There's the irritating royalty (Zhong Wu Mei), a rich playboy (Jin Chen), a bodyguard with a secret (Liu Xiu Wen) and a mysterious ethereal man (Hua Ying Chi).

Otome isekai with being transported (isekai ten’i) or reincarnated (isekai tensei) are popular in light novels but before I get a chance to read one, I was surprised that there's now a cdrama. I saw this labeled as based on otome game but I am unable to confirm. There are plenty of handsome men, alright and I was drawn to the bodyguard and ethereal man. I was excited to watch it but as I watch further it was difficult to keep my focus even for just one episode. It came to the point that it was getting harder and harder to pick it up again. The only thing that kept me going is that I wanted to finish the reverse harem winter line up.

Overall, I find the story, acting, and direction of the drama just weird. They have an excuse to get away with the weirdness since it is within an otome game but it backfired. The FMC (female main character) uses stage whisper, she talks to herself a lot and she always overhears critical plot points. These make sense since she's in the game but it annoys me.

The guys' insta love for the FMC made me lose interest. Yes, they are fictional characters in the game but I still need to feel chemistry for any of the characters. Maybe I felt it in the latter part but I was too disgruntled with the story by then.  And sadly, the two guys I was eyeing are the weakest links with their acting. For someone who loves a gazillion of bishonen, being a flower boy is not enough. The story might suck at times but I would want my boys to have great character and acting chops. There are at times that I dismiss a certain actor as not my type but their acting just swoons me over. Case in point, the main guys of Moon Lovers: Scarlet Heart Ryeo, Hajimete Koi o Shita Hi ni Yomu Hanashi and Top Management (one flower; see levels). I finished the 52 episodes of another reverse harem cdrama, Flame's Daughter, purely for the acting of the second and third leads. But the 24 episodes of Lascivious Lady was torture.

I don't normally get this bewildered from a story or the characterization. But even the prime minister and the king both seem strange to me. It's like the writer or director was on a trip. And there are two characters who are supposed to be Persians. Hmmkay.  But the rest of the acting of the cast is fine especially of the two leads when the story became serious.


There are game elements that I liked but not enough to save the drama. For example, the characters cards whenever a new character enters the picture,  the incorporation of lives and save points and lastly, the use of four actresses over and over again for different roles. LOL. Oh yeah she can change her wardrobe too. I just find it odd when she took off her skirt revealing a short skirt or shorts I can't remember now. I don't know why I'm being a stickler for this like Yuzi in culottes too in Sengoku Night Blood when Miyaka was in her school uniform almost the whole time in Fushigi Yugi. The fight scenes and the Chinese costume are of course superb as usual but except for the bodyguard's choker. It's so damn distracting.

There is a brush of gender bender and fujoshi elements at the early part and later on a reincarnation within the isekai which reminds of Flame's Daughter. I jumped into my first isekai otome game trope and I felt so duped. Don't worry though I will still give this trope a chance to wash off the disappointment. And to my amazement, the story ended in a cliffhanger and loose ends. I am not looking forward to another season. I can't even remember the last time I have this strong negative feeling for a reverse harem. Maybe you can watch it to satisfy your curiosity then once you get this feeling that it's getting dragging, you can then drop it and never look back.
Follow Reverse Harem Garden on: Youtube  |  Facebook  | Twitter
Please support via: Ko.fi  | Patreon | Paypal or please whitelist
For my trackers: MyAnimeList| TVTime| Goodreads| Anilist