Related Review/Book Review: To All The Boys I've Loved Before Book #3 Always and Forever, Lara Jean 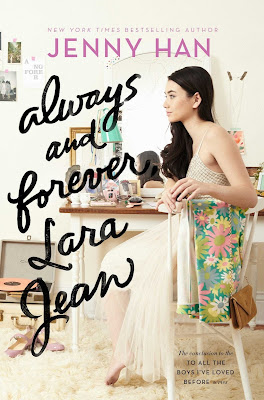 To All The Boys I've Loved Before Book 3# Always and Forever, Lara Jean


It's Lara Jeans's last months as a senior. She's waiting for the results of her college applications while planning a life-changing family event. She's in a crossroad of what the future holds for her. This is the last book of To All The Boys I've Loved Before trilogy.

The final book provides continuity to the ambiguous ending from Book 2. In short, there is no reverse harem element in this book at all but we do need this closure after all. I never thought I needed this closure but it made me care now for Lara Jean and Peter. For the second book I was pissed she didn't choose Ambrose and I was even okay if Lara Jean and Peter separated.

At one point I can't separate Jenny Han from Lara Jean with all her obsession compulsiveness from cookies to events planning. I don't remember being that mature or meticulous when I was at Lara's' age. And I don't find it believable that people her age are into 90s movies. Or am I wrong??? Jenny Han is a year old than me so I know this is Jenny Han talking when it comes to movies.

Ever since the news came out that the first book will be adapted into a movie I am now imaging the actress as Lara Jean. And as well as the other actresses who plays Margot and Kitty. The actor who plays Peter hasn't grew on me yet. And just like the earlier books, I love the family dynamics especially their sister bond.

I loved the analogy of the titles to the letter format. Starting with the greetings, To All The Boys I've Love Before and until to the salutation Always and Forever, Lara Jean. I think this has been the plan all along. Very sneaky! And as usual, I love the very busy cover and the signed effect for the fonts. The only other book that I can think of which makes me this excited in terms of books covers, is The Selection. But unlike with reverse harem, The Heir and The Crown, TATBILB trifecta is much easier to read.

Overall, it's weird that I didn't like the ending of the second book that fully cemented the reverse harem status but the third left me satisfied as we close the final chapters. Nothing fancy or spectacular just a teenager in a make or break it stage of her life. I will recommend this to young readers.

I can relate to Lara Jean's and Peter's dilemma of their future. Indulge me of my experience. My husband was my first boyfriend. He was 2 years older me and he went to a different city for college. The only communication that we have is occasional phone calls and the rest are through letters. Oh yes! I still have my box of letters. Not in a hat box though like Lara Jean's. But then I broke off with me purely out of pride thinking there's no way he'll be loyal to me since he's really handsome. Yes! haha But every now and then I thought of the what ifs. He was the one that got away.

Then when I entered college, there were only top 4 universities in the capital of my country to choose from. I didn't get in in the first one, the other 2 are for the bourgeois and so I chose the only option which coincidentally where he was also studying at too. It was a huge university so I hardly thought about him at all. Classes started and then one day I suddenly saw him in MY building. Outside my classroom! Turns out our two courses, AB and Commerce, share the same building. Most of the course have their own building. What are the chances??? So the rest is history. It was fate that brought us together again.

We never really know what the future will bring to despite all the planning or overthinking of the outcome.  Do what makes you happy and live without regrets.